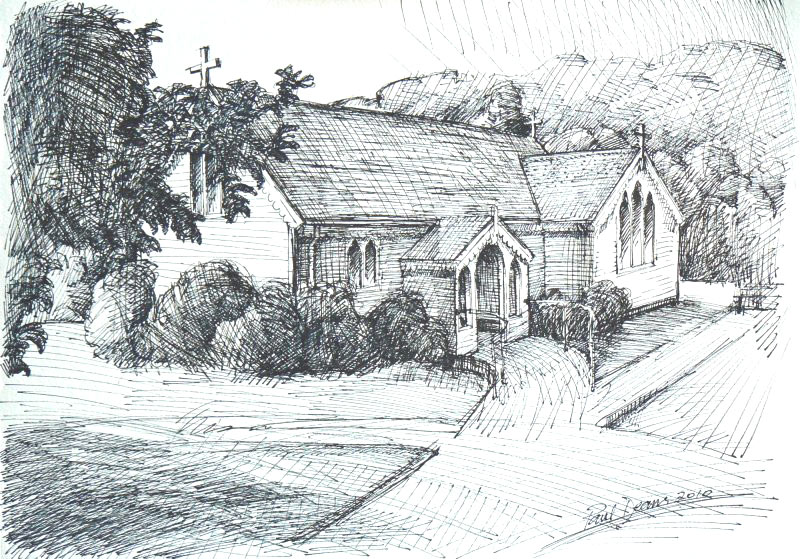 The Church of St. Mary

IN A COUNTRY CHURCHYARD

When Samuel Butler visited Heathcote in 1860, he described it as “a few pretty little gardens, stacks of corn in the fields and a little river with a craft or two lying near a wharf, while the nearer country is squared into many-coloured fields.” That same year St Mary’s Church, Heathcote, was opened. According to the centenary booklet published for St Mary’s in 1960, it is not clear whether it was the valley’s first church or not. The booklet says early plans for the new settlements of Christchurch and Lyttelton show a plan for a church and parsonage to be built on the lower side of the Bridle Path Road. Two acres were set aside and valued at ninety-six pounds and although the exact site is not known, it was probably meant to be half a mile up-valley from Ferrymead.

While services were held in private homes and in a temporary church, there were plans for a permanent building. A design for a church was drawn by the architects Mountfort and Luck in 1857. The church was to have cob walls, a nave with porch, chancel and a vestry. The foundations, quoins, buttresses and window dressings were to be of red stone from McCormack’s Bay area.

A church was built a year later on land which was given by the Bowler family. This building was not at all like the proposed design by Mountfort and Luck, probably for financial reasons. The church was officially opened in 1860 under the name of St Peter’s, but by the time of its consecration on February 8, 1866, it was known as St Mary’s. The consecration service was conducted by the Rev. H. Fendall (after whom the parish/suburb of Fendalton was named).

“The Lyttelton Times” of August 22, 1860 reported: “The church is an unpretentious wooden structure, simple in its design and pleasing in its effect. We believe it is a copy of St Lawrence Old Church, Isle of Wight, England, and is likely to prove, when finished, very suitable both in appearance and capability to the wants of the inhabitants of the valley.”

Parishioners and various district people contributed to the building. The newspaper said there was a comparatively large congregation present at the opening, and that a satisfactory collection was made in aid of the building fund.

In October 1887, St Mary’s first church committee was formed, and there were several additions and improvements to the church property in 1914. A church bell was acquired at Prebbleton and a belfry was built for it on the Sunday School. In the 1940’s it was removed and later was presented to the Missionary Diocese of Melanesia for the cathedral at Honiara, Solomon Islands. Also in 1914 the church was painted, windows were repaired, kneelers made, hymn books bought, and plans and shrubs were planted in the grounds. In 1916 an altar cross was given by Mr Nichol, an early resident and two candlesticks were given in memory of Listock and Violet Reed.

The next significant event for St. Mary’s was the shifting of the church in 1925 to a site nearer the Sunday School building. The move was made quickly, and the old site sold. A year later two transepts and a vestry room were added to the church, the borer-ridden sanctuary flooring was replaced and alterations were made to the chancel arch. A new iron front gate was built, new carpets were put down, and a church belfry was erected. Electric lighting was also a new and welcome addition.

From 1924 to 1928 the Rev. T.M. Curnow was vicar at St Mary’s He is remembered as being a “character”, and was the father of the well-known New Zealand poet, Allen Curnow.

The church’s seventieth anniversary was celebrated in 1936 with the dedication of a new altar and reredos. In 1937 electric heaters were installed in the church. This led to an incident in the early 1950’s when the then curate, the Rev Lester Pfankuch, was standing alongside one of the heaters. Hardly had he said, “I beseech you brethren… to present yourselves a living sacrifice,” when the smell of his burning cassock wafted down through the church!

The original timber that was brought over from the peninsula by bullock wagon in 1860 and used to build the church is still in sound condition. Timber lends great charm, as do the stained-glass windows. St Mary’s also still has the original chalice and paten brought to New Zealand in the days of the Canterbury Association. These are now stored with The Church Property Trustees because of their historical value, but they are used on special occasions at St Mary’s. The chalice and paten used Sunday by Sunday were presented in memory of Mr Charles Flavell, a long-time parishioner and manager of the then Canterbury Malting Company, a long-time employer of many of the local residents until the Company was sold during the late 1970’s or early 1980’s.

St Mary’s at various times was allied with Sumner, Woolston, Riccarton, Avonside, Linwood, Lyttelton, Otira, Banks Peninsula and also the Chatham Islands parishes. Today St Mary’s is part of the Heathcote-Mt Pleasant parish, and is a charming church to visit. It rated Heritage Category 2 and underwent some restoration in 2001 with funding from the Christchurch City Council, Lotteries Commission and parish contributions.

St Mary’s Church Hall, recently renamed as St Mary’s Village Hall, was built in 1910. A new lounge was added to mark the church centennial in 1960. Over the past few years, there has been a major fundraising drive to renovate and upgrade this facility. A new kitchen has been added and the toilet block was upgraded.

The Church of the Ascension

Some time before 1927 a number of people living on Mt Pleasant (including the Morten family who owned vast amounts of land from beyond Scarborough to past Heathcote) wanted an Anglican church on the hill. The first local church service was held on a section in the vicinity of Muritai Terrace on the 4th December 1927, but the church was never built there as it became obvious that population growth would be further down the hill. In the meantime, from the first Sunday in February 1928, and for nearly eleven years, services were held in the old school, opposite Muritai Terrace.

The Church of the Ascension, built with much love by its parishioners and opened on Labour Day, 1938, was a simple wooden structure built on farm land, complete with a large farm gate, donated by the Morten family. Originally very prominent on the hill and also visible from the Sumner Causeway, the church today is largely obscured by houses and trees. The Rev W Powell was the first Vicar. Rev Powell was the father of Una Dromgoole, a recent benefactor of the church after whom the new atrium is officially named. Mt Pleasant Presbyterians used the church on Sunday afternoons until their own was built, and Presbyterian children attended the Anglican Sunday School.

Lack of space for the Sunday School was relieved somewhat when a tram trailer, with seats down each side, was purchased. The Rev W Orange, a subsequent vicar of the church and later well known as Canon Orange, was renowned as a ‘wonderful’ preacher and Bible teacher. However, the installation of the plate glass altar window in memory of Dean Julius (son of Archbishop Julius) and his wife had to wait until after Rev Orange left as he felt that the panoramic view might distract peoples’ attention from the sermon and the service! What would he have thought of the current amazing view over McCormack’s Bay, the Pacific Ocean and the Kaikoura mountains?

Today, the heart of the church remains the same, although its buildings have recently undergone exciting changes. There is a new atrium entry, an updated meeting room, new kitchen and toilet facilities, along with an office/storeroom and a deck area. A memorial garden has also been developed on the downslope side of the building, thanks to the current parish congregation and friends.

The vicarage, next to the Church of the Ascension, was built in 1988. The house is built for the sun and at the east end has views over McCormack’s Bay to the Pacific Ocean and the mountains to the north. The building was severely damaged by the earthquake on 22 February 2011 and repairs were completed in 2016. It is currently leased.